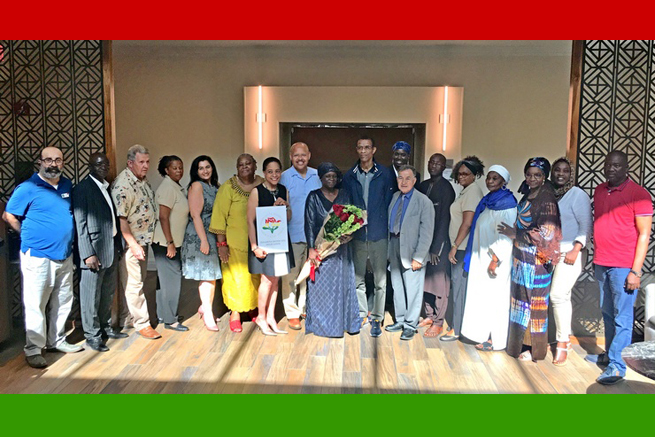 Members of Pasadena’s Sister City Committee led by Councilmember John Kennedy pose with Mayor Alioune Ndoye of Dakar-Plateau, Senegal, and his delegation after their arrival in Pasadena on June 14, 2019.

The group was hosted by Councilmember John Kennedy and included the Mayor of Dakar-Plateau, Alioune Ndoye, members of Pasadena’s Sister City Committee, and the Honorary Consul of Senegal, Mame Toucouleur Mbaye.

“I think this is a testament,” said Councilmember Kennedy,  “to how great a city Pasadena is, that it would adopt its first sister city in Africa, a continent with about 54 nations and extreme diversity.  It’s a testament to the kaleidoscope of diversity in Pasadena.”

Pasadena Councilmember John Kennedy, left, with Alioune Ndoye, Mayor of Dakar-Plateau, Senegal after Ndoye’s arrival with a delegation in Pasadena on June 14, 2019.

Added Kennedy, “The fact that we would choose a city that is more than 90 percent Muslim, is a testament to how we interact with each other, that we have respect for each other, and that’s what we  are, is a microcosm that can grow, for the rest of the nation.”

Speaking through a translator, Ndoye told Pasadena Now that in looking at information provided to him through Mbaye over a year ago, he realized “there were so many positive elements about the city in terms of the education system, and the organizations that are based here, and felt that Pasadena would be an amazing city to develop a rapport with.”

The delegation will formalize its sister city relationship Monday, June 17, when the Ndoye and the delegation from Dakar-Plateau visit the Pasadena City Council Chambers.

While in Pasadena, Dakar-Plateau Mayor Ndoye and the dignitaries will take part in commerce and business discussions, and visit schools, local museums, cultural centers, and a historic church. The group is scheduled to explore Caltech, the Tournament of Roses House and the Rose Bowl Stadium.

Dakar-Plateau itself is relatively small, with a population of 36,900, but it is one of 16 districts of Senegal’s capital of Dakar, a sprawling coastal city of over 1 million.  Dakar is the westernmost city on the African mainland.