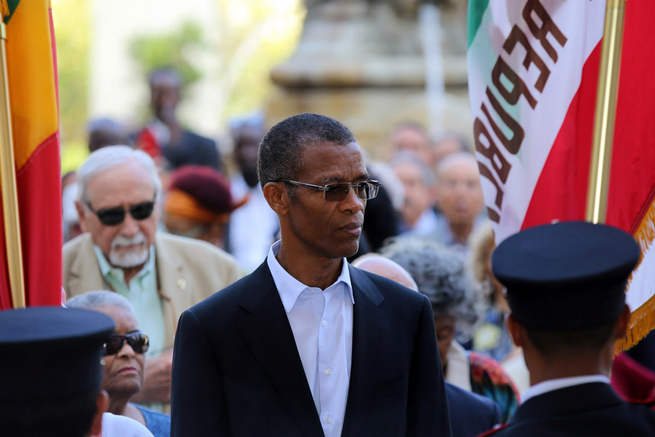 A community reception Tuesday at Pasadena City Hall feted his Excellency Alioune Ndoye, Mayor of Dakar-Plateau of the Republic of Senegal, and his Esteemed Delegation, all of whom are in Pasadena to formalize the new Sister City relationship between the two cities.

The courtyard ceremony began with a Pasadena Police and Fire Department color guard and U.S. and Senegalese pledges of allegiance by their respective audience members.

Mayor Ndoye smiled and held high a nameplate similar to those used in Pasadena Council Chambers to identify Councilmembers which bore his name, presented to him by Mayor Tornek.

Tuesday’s ceremony was one of a number of activities to which Ndoye and his delegation are being treated since arriving in Pasadena last Thursday, June 13.

The public has several more chances to meet the entire delegation:

Community Reception at Alkebu-lan Cultural Center, 1435 North Raymond Avenue, from 3 to 5 p.m. Reservations for this event have closed.

Dakar-Plateau itself is relatively small, with a population of 36,900, but it is one of 16 districts of Senegal’s capital of Dakar, a sprawling coastal city of over 1 million. Dakar is the westernmost city on the African mainland.