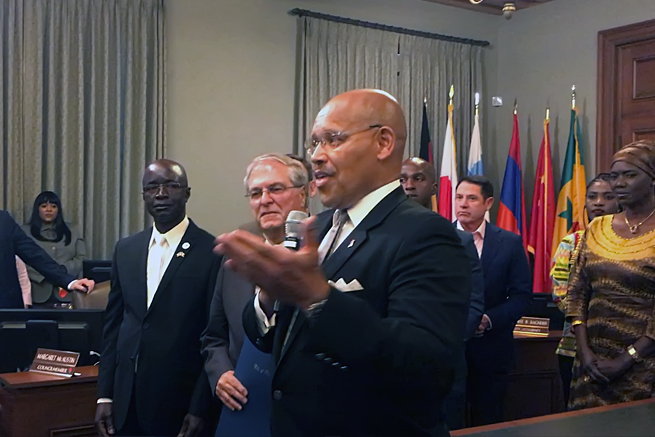 Whirlwind week in Pasadena is filled with local samplings of art, business, education and culture for Dakar-Plateau Mayor and delegation

Last August 27 the City Council unanimously approved Senegal’s Dakar-Plateau, a burg of some 36,900 located in the central district of the capital city of Dakar, as Pasadena’s sixth official sister city.

Ndoye, on behalf of a large Dakar-Plateau delegation,  thanked the City Council for the invitation, and said, “This beautiful City of Pasadena plays such a major role in the state of California, in particular because of its main assets in terms of science and education.”

Ndoye also noted “centuries of friendship and solidarity between the United States and Senegal.”

Mayor Tornek, noting Pasadena’s long history with sister cities, told the assembled audience, “We take these relationships seriously because they help us to grow as a city, and to better understand the universality of friendship.”

Councilmember John J. Kennedy helped spearhead the collaboration. Kennedy told the delegation, “If you could look out and see yourselves, you could see how special you look, especially in terms of what the fabric of Pasadena is really like. It represents a multiplicity of cultures, backgrounds, ethnicities, hopes, and aspirations.”

‘We’re looking forward to an extraordinary relationship with you,” added Kennedy, and told the delegation that he hoped that the two cities would visit each other every year.

Both mayors then signed a historic Agreement of Cooperation declaration.

During their whirlwind stay, the Dakar-Plateau delegation visited local restaurants, attended the CONCAF Gold Cup game at the Rose Bowl Saturday, and took a helicopter and bus tour of the city. On Monday, their “Education Day,” they visited Pasadena City College, and the Huntington Library and Museum.

Later in the week, “Science Day” will take them to Caltech, the Space Solar Power Project, the Global Environmental Center, and the Joint Center for Advanced Photosynthesis.

Thursday will feature a day of art and museums, as the delegation visits Art Center College of Design, the Norton Simon Museum, the Pasadena Museum of History, and the Alkebu-lan Center.

Friday will feature a community gala event at Robinson Park and Recreation Center.

Dakar-Plateau,  the westernmost city on the African mainland, joins Ludwigshafen, Germany; Mishima, Japan; Järvenpää, Finland; Vanadzor, Armenia; and Xicheng District in Beijing, China, as a sister city partner. It is the first from the African continent to be so designated.

The city itself is relatively small but it is one of 16 districts of Senegal’s capital of Dakar, a sprawling coastal city of over 1 million.